In just 3 months, the price of Zclassic (ZCL) has increased by +5,768%. In this post, I’ll give some background to what Zclassic is and try to explain what is going on with it.

Also read: The Art of Buying the Dip

A Quick History Lesson on Zclassic

Zcash (ZEC) is a privacy-centric cryptocurrency that launched Oct 28, 2016. It put cutting-edge cryptographic research in non-interactive zero-knowledge proofs (zk-SNARKs) into practice, allowing users to make transactions concealing both the sender and receiver of a transaction, as well as the amount being sent. The cryptography itself provides possibly the strongest privacy guarantees of any cryptocurrency, but part of the integrity of the protocol (specifically, preventing counterfeit coins from being issued) relies on a process known as trusted setup. Zcash launched with a founder’s reward, which for the first 4 years subtracts 20% of every block reward and distributes it to stakeholders of the Zcash Company to guarantee maintenance and development of the protocol. Zcash is an open-source project based on the Bitcoin codebase.

Since Zcash is an open-source project, there’s nothing to stop anyone from simply copying the codebase and removing the 20% founder’s fee if they wanted. That is exactly what happened, and that fork now goes by the name of Zclassic, which launched only a week after Zcash, reusing the same parameters from the trusted setup. Up until August 24 this year, Zclassic devs have been merging code updates from Zcash and issuing new releases in parallel. Since then, development on the Zclassic branch appears to have stagnated. Currently, I’m not even able to find a working block explorer for Zclassic. On Dec 14, the developer of Zclassic, Rhett Creighton proposed a relaunch and rebranding of Zclassic into “Bitcoin Private”, as a means of “revitalizing” the coin.

I would like to propose revitalizing @ZclassicCoin by migrating it to become a Bitcoin Hardfork, "Bitcoin Private" (or possibly other name).

New coinbase inputs would be airdropped onto the blockchain as a hardfork. What do you think? Should we add "Bitcoin Private" to the mix? pic.twitter.com/xOAKjCzzFk

This announcement caused the price to surge +2,000% in only a matter of days.

Why is this happening?

Bitcoin hard forks have become somewhat of a trend in recent months, with the first successful one being Bitcoin Cash. At the time, it was joked within the community that soon Bitcoin hard forks would cover the entire Coinmarketcap-spectrum.

The joke has turned prophetic in the sense that 3 of the top 13 cryptocurrency positions by market capitalization are now held by Bitcoin or Bitcoin hard forks (Bitcoin, Bitcoin Cash & Bitcoin Gold). One could argue that Bitcoin Diamond (BCD) should make the 11th spot if Coinmarketcap had info on the total supply (which should be around ~167M), as 10 BCD are supposedly credited for every 1 BTC as their website claims.

What does it mean for an altcoin to become a Bitcoin hard fork? 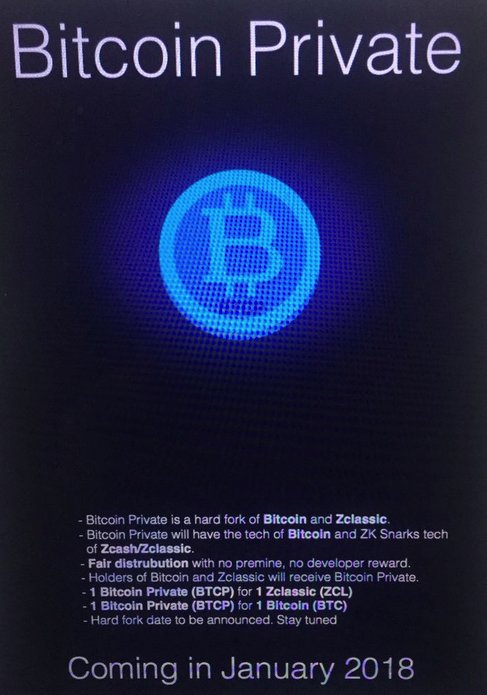 The Zlassic and Bitcoin UTXO sets will merge, creating a total of 1.8M + 16.7M = 18.5M Bitcoin Private coins upon launch. Inflation schedule will be revised so 21M cap is still kept intact.

What “Bitcoin Private” essentially will be is a coin that borrows the name and UTXO set from Bitcoin (and Zclassic) and technology from Zcash. I contend that the rebranding from Zclassic to Bitcoin Private is a stroke of genius from Rhett Creighton’s side as it is going to make traders value Zclassic in relative terms to other Bitcoin hard forks such as Bitcoin Gold and Bitcoin Diamond. It is the cryptocurrency-equivalent of putting the word “blockchain” in your company name and seeing your stock soar 394%.

The great thing for Bitcoin Private is that Bitcoin Gold and Bitcoin Diamond are both ridiculous projects. I’ve written a piece on Bitcoin Gold previously which you can read here.

Bitcoin Diamond’s valuation is even more absurd, since it is traded at a valuation which would place it at the ~11th spot among cryptocurrencies worldwide right now even though background research suggests that the project may be entirely fraudulent. That didn’t prevent the valuation from reaching that high before any source code for it even existed. My theory as to why Bitcoin Diamond is trading at such a high valuation is that there’s always going to be a handful of traders that either are trading by the greater fool theory or are entirely oblivious to fundamentals when valuating Bitcoin hard forks (i.e. not understanding that the tenfold increase in supply means $31.6 per coin is actually equivalent to $316). The price of these forks is simply determined by the size of the group of irrational buyers and the free float of the coin, which for both Bitcoin Gold and Bitcoin Diamond is deceivingly small.

Meanwhile, the free float of Zclassic (ZLC) is even smaller than that of Bitcoin Gold or Bitcoin Diamond. Merely 1.8M ZLC has been mined since Nov 2016. As Zclassic essentially becomes “Bitcoin Private futures” they’ll be exposed to the same group of irrational buyers, and prices beyond $400 per ZLC all of a sudden doesn’t seem that unthinkable (currently trading at $80). What’s funny is that buying Bitcoin Private doesn’t even have to be such an irrational idea. Fungibility is one of the most sought-after additions to Bitcoin, and zk-SNARKs do provide a solution to that problem. The relaunch will increase the coin’s network effect tremendously, forcing wallet support as well as listings on a multitude of exchanges. The only thing that is ridiculous about Bitcoin Private is the notion that an altcoin can fork into becoming a “Bitcoin hard fork” just by merging the Bitcoin UTXO set.

What do you think the next coin adding the Bitcoin UTXO set and rebranding will be? Let us know in the comment section below!